Third Culture Kids (TCKs) spend a significant part of their developmental years in a culture other than that of their parents, and so develop a relationship with both their passport culture and their host culture. Each TCK’s experience is different. Along with the benefits of growing up in an international setting, TCKs may face challenges including lots of grief and loss, a sense of identity and belonging, transitions in and out of their passport country and struggling to meet expectations. These young people are in need of personalised membercare.

Kath’s heart is to see TCKs be socially, emotionally, physically and spiritually healthy. They should know that they are listened to, cared for, appreciated and valued. As Third Culture Kid Advocate, Kath will be equipping parents and families, running overseas retreats and children’s programs and providing input into Interserve’s resources and structures.

Kath particularly wants to help others learn how to encourage and walk alongside children and teens through the many transitions they face, by building networks and teams across Australia to support TCKs. 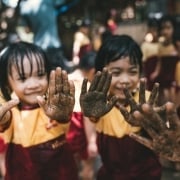 A little more about Kath

Kath is a professional social worker who has an enduring passion to serve children and teens. Kath is Interserve’s TCK Advocate and walks alongside Interserve TCKs throughout their journey, supporting them through preparation, serving, home assignment and returning. Kath is also involved in regional conferences, designing and delivering resources for TCKs. Additionally, Kath is TCK Coordinator for Missions Interlink, and founded Interwoven, which writes resources for TCKs. She is team-supported in these roles.

When Kath was invited to run a children’s program for an Interserve team retreat in Cambodia, she realised that God was opening a door for her to work with these children, often referred to as Third Culture Kids (TCKs). She returned to Cambodia for several years to volunteer at Hope International School as a TCK support person, and was also a youth group leader at an international church. Through these experiences, Kath grew a greater understanding of the world TCKs live in and the challenges and struggles they face.

Kath is a vibrant, bubbly young woman who has a zest for life and people. Her profession as a social worker has given her an enduring passion to serve children and teens. She currently attends Coromandel Valley Uniting Church where she has been actively involved in children and youth ministry roles. She loves photography and really enjoys getting to know people over a good cup of coffee.

“Have I not commanded you? Be strong and courageous. Do not be afraid; do not be discouraged, for the Lord your God will be with you wherever you go.”

Ways you can be praying

Why we chose Tabor for On Track Together

To our God of the unexpected
Scroll to top